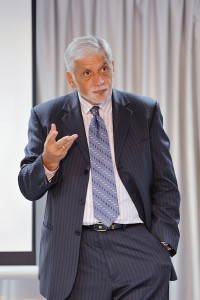 There he is, Mark Komissarov – the author of the fantastical idea regarding the human brain’s ability to recognize information from the surrounding world directly, without using the usual sensory organs for this process.

Until 1999 rolled around, his biography was purely ordinary. He was born in 1949 in the city of Moscow – the capital of the former Union of Soviet Social Republics. In 1966 he graduated a comprehensive school of general education. In the same year he was enrolled in the Moscow Institute of Chemical Manufacturing, at the end of which he received a well-deserved diploma of mechanical engineer.

And later – an ordinary life of the average citizen of the great Soviet country: a family, a son, work, home. And so on until year 1989 – immigration to the United States of America: a rough path of adaptation to a new social environment, a foreign language, and other traditions and lines of behavior. He went through it. The next milestone on the path of his life was a one on one encounter with the mystical phenomenon of “Clairvoyance”. This encounter took place in 1999 and became a turning point in his preconceptions of the world in which we live, of the possibilities of the human brain and shortly impending future of Humanity as a whole.

Because it turned out that Clairvoyance is not mysticism, but an objective reality of the thus far unused ability of the human brain to receive information from the surrounding world directly, nullifying the need for our familiar organs of sense. And the awakening of this hibernating sense, rousing it to work opened before the human boundless prospects of further development, which will elevate the Human onto the next step of his Evolution.

The understanding of this phenomenon by physics, the motivation for traditional science to study Infovision, active implementation of this new ability into routine tradition of the modern-day human – this is the goal that Mark Komissarov set for his life today.